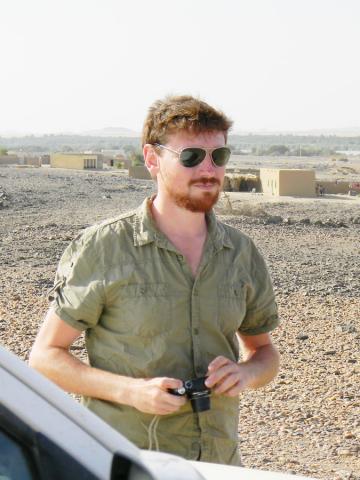 Ever since I began studying archaeology, when I was eighteen, I have been interested by the way in which people live in different environments. In the ten years that I have been working as an archaeologist I have been fortunate enough to excavate in many different places from the islands to the west of Scotland to the Hajar Mountains in Oman. Whilst working in these places I have learned not only about the past but also a great deal about the cultural variety in the world. Living and working on Mograt Island is certainly no exception and it is a pleasure to meet, and work alongside, local people whilst we investigate the island’s long and fascinating past.

My role on the Mograt Island Archaeological Mission is mapping and then excavating some of the wonderful sites on the island to try and find out where they are, how old they are and what they mean.

This often involves working with people from the local community who we employ and who are then trained in some of the skills of field archaeologists. In previous seasons I have worked with Jens recording the tombs to the south of al-Karmal. This season I worked at the Islamic fort at al-Hilla village in Kalasaikal Bahri and at the post-Meroitic fortress in Mikaisir. When not on Mograt, I work full time as an archaeologist on sites in and around Cambridge.