The Fortresses of Mograt Island Project 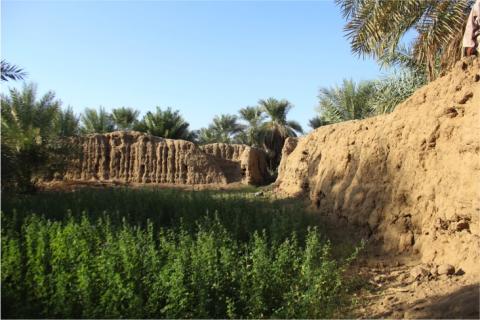 Mograt Island has been a strategically important place ever since antiquity due to its position at a point where several long-distance communication routes meet the river. This importance is reflected in the numerous fortresses which line the banks of the island – Mograt possibly has more fortresses than any other part of the Nile Valley. The island’s downstream tip is occupied by the fortress of Ras al-Jazira, followed further east by the fortifications of Mikaisir and Kurta, the latter of which is situated on a small island north of Mograt. Another fortress is located right in the center of Maqall, which today is the main hub of the island with a ferry connection towards Abu Hamed. The southern bank of Mograt has a fortress near al-Karmal, called Jebel al-Hilla, whilst another fortification can be found in the village of al-Hilla further downstream. It is possible that even more fortresses are still hidden in the dense vegetation zone near the river – al-Hilla fortress itself was unknown to archaeologists until the team of the Late Prehistoric Survey came across it in spring 2014.

The aim of the Mograt Island Fortress Project is to study the rich record of the Mograt fortresses. We want to map and date them and learn more about their functions. But we also want to investigate what life in the fortresses was like, how they relate to the surrounding sites, and finally how they were used and re-used through time.

Investigations of the fortresses started in 2006 and 2008 with the previous project, the Humboldt University Nubian Expedition. Trial excavations in the fortress of Ras al-Jazira brought to light the remains of a Medieval church. The recovered pottery suggests that Ras al-Jazira fortress was used from the onset of the Christian-Medieval period – about 1400 years ago (c. 600 AD) – for at least 300 or 400 years. The fortress of Mikaisir is even older. Excavations of its interior mudbrick structures produced 14C-samples which point to a date between 1600 and 1450 years ago. This dating is supported by the layout of the fortress, with stone walls enclosing a square space which housed buildings from less durable materials. The biggest surprise so far has come from the fortress at the village of al-Hilla, which we only began to investigate in spring 2015. This fortress seems to be the youngest on the island, dating only from the Islamic period – we hope to gain more data on the site during future Research.

It seems that all the fortresses on Mograt were linked with politically unstable times, be it in the late antique post-Meroitic period (Mikaisir), the early Christian era (Ras al-Jazira) or more recent Islamic times (al-Hilla). But we still need to learn by whom and for what exact purpose each one was built – whether they served as refuge for the residents of the island, as strongholds of local rulers or to control riverborne traffic. Answering these questions may also help us to understand the role Mograt played in the wider world of the Middle Nile valley from antiquity to the most recent past.