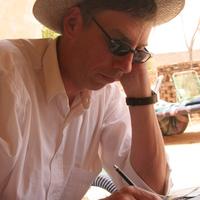 My name is Peter Becker. I was born in western Germany in 1964. After studying at the universities in Kassel and Hannover, I moved to Berlin where I work as an architect with my own company. My first experiences in archaeology was on Elephantine Island, in Egypt. Since 2006, I have been working in Sudan, first on Mograt Island, but also at the 4th Cataract and at Shalfak at the southern end of Lake Nubia.

In the current 2019 season, I recorded the colonial period building in the centre of Abu Hamed which we hope to develop as a local museum. I also excavated in the fortress on Kurta Island.

Since I have been a child, I was interested in archaeology, particularly in studying ancient buildings.