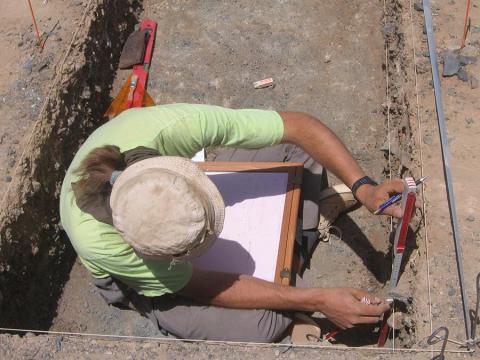 Excavation is the controlled uncovering of archaeological remains while documenting every detail of the things we see and find. Usually excavations are undertaken at places that have previously been identified as an archaeological site by features and objects which are visible above ground. Such sites can be known for a long time, or can be discovered in a survey. Excavation is a very time-consuming process, thus archaeologists need to carefully select which sites to excavate and which to leave untouched. The most important thing about excavations is to meticulously document not only all objects, but also all features – e.g. walls, burial pits, charred fire places, living floors, differently coloured sediments – that are found during digging. This documentation is done by drawing, photography and written description. Methods of excavations are complex, as it is not easy to correctly recognise and interpret all the traces of past human activity buried in the ground. That is why student archaeologists are trained in excavation methods in the university and on the ground.

When we excavate graves, of course we first want to know to which period or culture a certain burial or cemetery belonged. But we also want to learn many more things, like how the people in the past built their tombs, with which provisions they buried their dead and what they believed about the afterlife. The type of the tomb, but also the variety of grave goods and the materials from which they were made, can also tell us about contacts with other cultures or places in Sudan, Egypt or even beyond.

In contrast to surveying, excavations can give us a detailed look at a specific place, but they also take a lot more time than a survey. This means that a combination of both methods is often a good solution when handling a large number of sites in one place, like on Mograt Island.