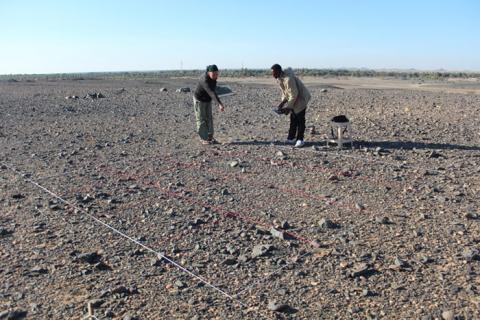 The Late Prehistoric Survey is a sub-project of the Mograt Island Archaeological Mission. It is the continuation of previous surveying work which was initiated by the Humboldt University Nubian Expedition (H.U.N.E.) in the years 2006 and 2008. The aim of the survey is to locate, map and further investigate Late Stone Age sites (12,000 to 5,000 years ago) and their specific Environments, in order to learn how Mograt looked in the past and how it has changed through time. Sometimes nothing special is visible on a site except for very small stone tools, ostrich eggshell beads or pottery fragments. These sorts of sites often need the trained eye of prehistoric archaeologists to find them. The items that we find are usually the remains of camp-sites, work-sites and villages that existed several millennia ago in that same place. Sometimes it is only the specific colour of the soil or the presence of fossils that attract the geo-archaeologist’s attention because these clues can tell us a great deal about climate and vegetation in the past. E.g. a wetter climate at certain periods meant that there were lakes with plenty of freshwater plants, fish and mollusks as well as dense vegetation cover, which allowed large animals to live in the area. These natural aspects of the riverine landscape would also have shaped the imagination of the people, and our work tries to build a better picture of how life on Mograt would have been and how it has changed from 12,000 years ago up until the present day.

If we want to understand former human interactions with past landscapes we need to study artefacts (objects made/altered by humans), ecofacts (plant and animal remains), soils and geology. This of course involves access to relics from the past within present landscapes. As archaeology is a scientific practice that takes place in the present, often far from large cities and resources, successful work on Mograt Island depends on working closely with the Sudanese authorities and with local people.

For this reason, archaeologists and geologists have to cross the area they are surveying by car or – much better – by walking to collect samples, to note down their observations, to take co-ordinates by means of GPS devices, and to photograph their findings. In this sense, the landscape of Mograt Island and every single stone on it is like a book that, if we are able to read it, will tell us something about the island’s more distant and – for great parts – lost past.