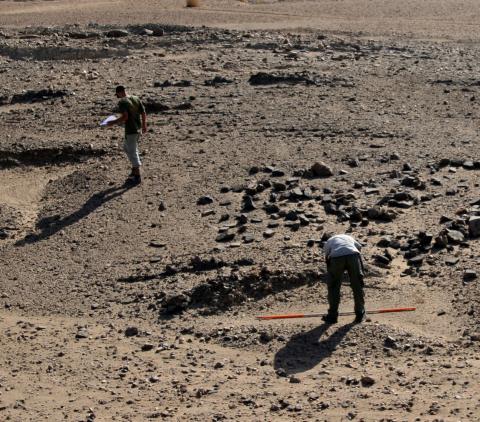 We can try to answer questions about Mograt’s past by first surveying the island and then by excavating specific places. The aim of the survey is to identify archaeological sites which are previous­ly unknown (to archaeologists). A site can be many things, for example, the ruins of a Medieval fortress, a field of tumuli (burial mounds) or rocks with carvings of animals, boats, symbols or people on them. Surveying involves searching for architectural elements like walls or grave superstructures, conspicuous features in the landscape that may point, for example, to raw material extraction, or objects like stone tools or pottery on the surface by walking – or driving – through a given area. A survey can be systematic, e.g. with an entire area being covered, or more selective, with archaeologists just visiting promising spots or asking local residents about sites they know. This depends on the time available, on what exactly the archaeologists are looking for, and how much they previously know about the surveyed area and its environment. For example, on Mograt, we have a good level of knowledge about the distribution of sites – thus, we expect to find Stone Age sites in the island’s interior and will look for them there. Some features, like the large burial mounds, can even be spotted on satellite and aerial images, and mapped before the actual survey begins. This means that the archaeologists can then simply visit the pre-recorded sites to collect more data on the ground. But a survey can also entail a complete surprise such as the remains of the mudbrick fortress at the village al-Hilla in Kalasaikal Bahri, of which no archaeologist had previously known.

Once identified, sites are numbered and marked on maps that will later be made available through publication in books and online. When archaeologists come to an area for the first time, or when there is a lack of time for fieldwork, surveys are especially useful to figure out where people lived, worked or were buried over a huge area which couldn’t be excavated or otherwise studied in more detail.