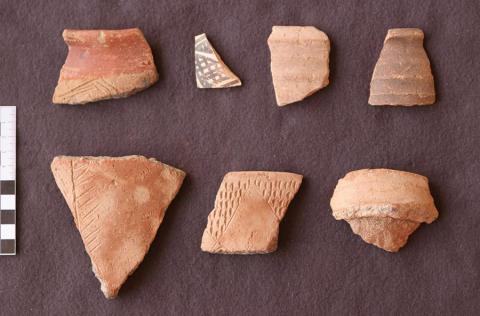 Pottery, more exactly: potsherds, are the most common and most abundant find in archaeological excavations and surveys. In ancient societies from the Late Stone Age onwards, pottery was the most important material in daily life, somewhat similar to what plastic is today. Shape, decoration and the materials from which pots were made changed through time. Pottery of the late Stone Age looks completely different from pottery of the Meroitic or the Medieval periods. Thus, pottery is the most important – and most readily available – evidence for dating a site.

To make the most of the evidence, we need to have a detailed look at both potsherds and whole vessels. To analyse the pottery, we draw, photograph and measure it as well as record the material the vessel was made of, its shape and decoration. By comparing these data to information about pottery from other sites and previous excavations we can learn from which period a pot dates , whether it was produced locally, for example by the people living on Mograt Island, or imported from Egypt or other places. Pottery can also tell us a lot about how the people in the past organised their daily lives, for example which kinds of pots they used for cooking or storage, whether they produced these vessels themselves or bought them from specialised potters, which kinds of pots they liked for serving food and which vessels they deemed appropriate to deposit with their dead.