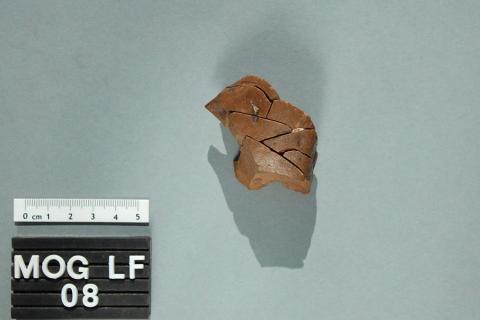 Before the use of metal, most cutting instruments like knives, sickles and saws, but also borers, spear points and arrowheads were made from stone (lithics). Provided that stone was available, of course. On Mograt there are lots of Nile pebbles. If you were in need of a sharp instrument you could just knap (use another stone to flake off a piece of one of the numerous Nile pebbles) and you were ready to go – as long as you knew how to do it, that is! Past people had the skills to predict how a stone would break when being struck with a hammerstone. They also developed sophisticated techniques and skills which allowed them to produce complex and often beautiful tools by precisely cutting standardised blanks. Likewise, they knew how to shape tiny fragile tools by knapping off innumerable small flakes; to find these sometimes very small objects during excavations we need to use a sieve.

Stone knapping produced a vast amount of debris, that is parts of tool production that could not be used and were not considered worth keeping. In the pebbly plains of Mograt Island you can still find traces of this waste almost everywhere, dating back as far as the Middle Palaeolithic, also called the Middle Stone Age (up to 300,000 years ago). Archaeologists cannot collect all these pieces, they only select samples that offer insights into different stone, tool and process waste types in order to study changes in preferences and techniques over time.

Scratch marks on lithics can tell us something about their former uses, which included, for example, scraping leather, drilling holes in ostrich eggshell beads, cutting wood, or grinding coloured pigments. Other lithics reveal evidence of having being prepared through firing, or having been hafted (fixed) onto wooden handles. Projectiles like arrow heads and spear tips which were employed for hunting are often broken due to heavy use. Some special lithics, such as particular weapons, may have belonged to specific styles of clothing and were used during ceremonies. Such tools are also often found as grave goods.